“I’m anxious — again! I’m anxious day and night. I wake up anxious and I go to bed anxious. I’m a total wreck. And I’m not doing anything to help myself! I know what helps and I’m not doing it! What’s wrong with me? Why am I not doing the things I know full well will make me feel better?”

“Oh,” Scott said. “That’s an easy one. It’s because you’re an idiot.” Then he said he’d call me after work.

When Scott called me an idiot, I initially took it as a joke — a bit of sharp-elbowed levity meant to nudge me out of my morbid self-involvement. As a brother, friend and fellow anxiety sufferer, Scott has license to make such jokes. And they help; they truly do. But the more I think about Scott’s comment the more I come to see it as containing real wisdom, as well as the power to explain one of the particular hells of anxiety: its tenacity.

Like many people who have been given a diagnosis of an anxiety disorder (and many who have not), I am always braced for the next recurrence. Anxiety, like the tide, is forever receding and returning, receding and returning. I have been experiencing this pattern for nearly 20 years now, so that my anxiety has come to seem, at times, inevitable and unassailable — a fait accompli. My anxiety, I’d concluded, is what I am. There is no escape.

I should define “idiot” for our purposes. I don’t mean someone of low I.Q. or poor academic abilities. Intelligence as commonly conceived has nothing to do with it. By “idiot,” I mean exactly what my brother meant when he tagged me with the epithet: an impractical and unreasonable person, a person who tends to forget all the important lessons, essentially a fool, one who willfully ignores all that he has learned about how to come to his own aid. A person who is so fixated on the fact that he is in a hole that he fails to climbout of the hole. An idiot, in short, is someone who is self-defeatingly lazy. 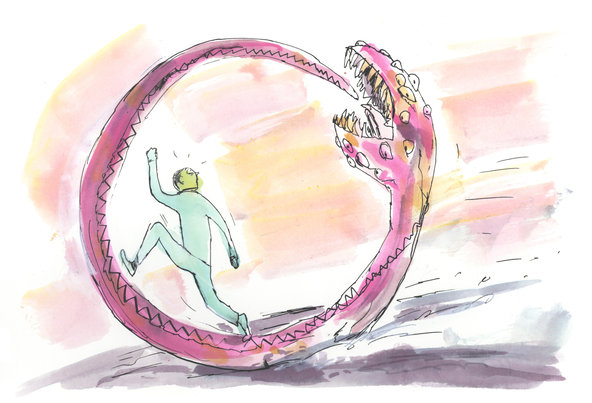 Laziness: it isn’t a characteristic usually associated with the anxious. Hysteria, yes. Clamminess, yes. A shrill speaking voice, often. But laziness? If anything, people tend to view the anxious as more active and motivated than normal, because they are more haunted by the specter of failure. And yet long experience has taught me that it is laziness — and not enclosed spaces, social situations or any other countless triggers — that is the foremost enemy of the anxiety sufferer, for laziness prevents him from countering the very patterns of thought that make him anxious in the first place.

It’s true that the anxious are rarely slothful in any typical sense. It’s more that we tend to be undisciplined, or somehow otherwise unwilling to see our anxiety for what it is — a habit of mind. To the argument that anxiety is not a habit but an affliction, I’d respond that the two are not mutually exclusive. Anxiety may come on like an affliction, but it persists due to habit. Or, to put this another way, just because you are afflicted with a mental disorder doesn’t mean that you can’t apply your conscious will to mitigating that disorder. Even if you use medication, as I do, to coax your nervous system in a more salutary direction, your will — your determination to act in a way that is counter to your nature — still factors in. Indeed, I am convinced it is essential to recovery.

This isn’t to say that being willful is easy. Anxious thoughts — the what-if’s, the should-have-been’s, the never-will-be’s — are dramatic thoughts. They are compelling thoughts. They are thoughts that have no compunction about seizing you by your lapels and shouting, “Listen to me! Believe me!” So we listen, and believe, without realizing that by doing so we are stepping onto a closed loop, a set of mental tracks that circle endlessly and get us nowhere. This makes the anxious habit very hard to break. Over time those mental tracks deepen and become hardened ruts. Our thoughts slip into grooves of illogic, hypervigilance and catastrophe.

My own mind, I am fairly certain, will always gravitate toward anxiety. And like many, I will often be disinclined to do anything about it. The reasons for this are no doubt complex and myriad. But it is certain that anxiety is exhausting and demoralizing: in many cases, as you listen to your anxious thoughts you get tired and apathetic. You get depressed. And that hopelessness, inaction and despair can become a sort of cocoon, a protective layer between you and the high-pitched terror of it all, and maybe, over time, even a painful and perverse comfort.

But that doesn’t mean — and here is the good news — that there is nothing we can do about anxiety. Indeed, there is plenty a person can do. The promising thing about a habit is that it is not the same thing as a fate. An alcoholic, we are told, is always an alcoholic — but not every alcoholic drinks. Similarly, an anxious person will always be at risk of anxiety, but he needn’t be troubled by it on a daily basis. He can avoid his own tendencies. He can elude his own habit.

To accomplish this, however, he has to work, and work hard. He has to fight — every day of his life, if he’s got it bad — to build new patterns of thought, so that his mind doesn’t fall into the old set of grooves. He has to dig new tracks and keep digging.

As for what that digging entails, I have my preferences. Over the course of my anxious life, I have found two reliable methods to keep my anxiety at bay: Zen meditation and cognitive-behavior therapy. Both methods teach, in their own fashion, that one’s thoughts are not to be taken as the gospel truth; both foster mindfulness and mental discipline. But you will likely have your own favored methods. You might find yoga, or exercise, or therapeutic breathing, or prayer are what work best for you. I’m not sure it matters what a person chooses — so long as he chooses and keeps choosing. So long as he remains dogged. Anything else, as my brother might say, is idiocy.