Did Christ really have awesome abs? Western art has frequently stumbled over the contradiction between the ascetic figure of Jesus of Nazareth and the iconography of Christ inspired by the heroic, Hellenistic ideal: Christ as beautiful, tall and broad-shouldered, God’s wide receiver; blue-eyed, fair-haired, a straight aquiline nose, Christ as European prince.

Rembrandt van Rijn, in a career rich with artistic innovation, begged to differ. A new exhibition at Paris’s Louvre museum—and coming to Philadelphia and Detroit later this year—shows in dozens of oils, charcoal sketches and oak-panel studies how the 17th-century Dutch painter virtually reinvented the depiction of Jesus and arrived at a more realistic portrait.

Where artists did rely on life models, they were uniquely beautiful specimens, such as in Michelangelo’s Pietà. Rembrandt, working in the relatively open and tolerant society of Golden Age Holland, turned to life models for Jesus to give an “earthly reality” to the face of Christ. He often relied on one model, a young Dutch Jew, whose face appears in the seven oak panels. An unnamed Dutch auditor assaying Rembrandt’s possessions during the painter’s later bankruptcy notated one of these panels as “Head of Christ, From Life,” and the curators use this note as an evocative departure point for the exhibit.

The poor and ascetic Jesus likely was small and thin and almost certainly olive-skinned, with black hair and brown eyes, and so Rembrandt painted him. In this he anticipated much more recent studies of what the historical Jesus was like. The savior of Rembrandt’s faith was a young man with a sweet, homely face, heavy-lidded, stoop-shouldered and wan.

Rembrandt’s recasting of Christ culminates in the 1648 “Supper at Emmaus,” where the unprepossessing figure of Christ seems almost stunned, slack with preoccupation, rapt in a conversation no one else hears. The painter’s Jesus is no hero of suffering and sacrifice; instead, he’s a kindly, hungry pilgrim. 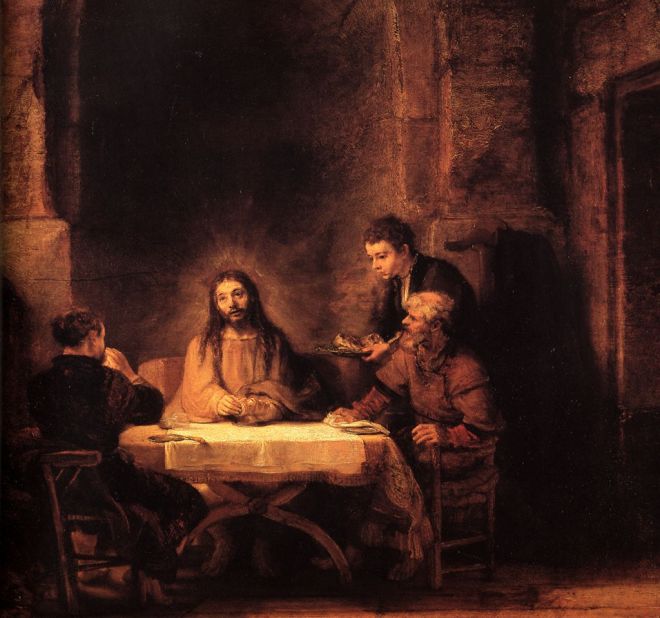 Viewing the pictures in order of their creation shows how Rembrandt’s own coarse features gradually infiltrated the images of Christ. It feels like the most spiritually edifying aspect of these works: When Rembrandt looked into the face of his savior, he saw his own.

The exhibition lasts through July 18 at the Louvre, will go to the Philadelphia Museum of Art from Aug. 3 to Oct. 30 and will end at the Detroit Institute of Arts (Nov. 20-February 2012).