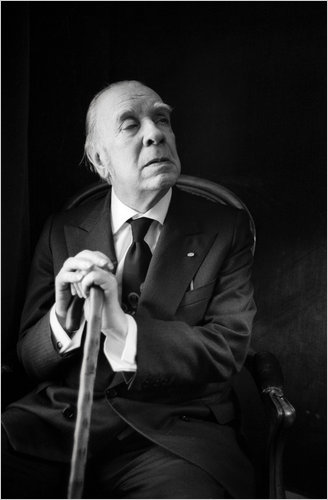 Little is quite as dull as literary worship; this essay on Borges is thus happily doomed. One finds oneself tempted toward learned-sounding inadequacies like: His work combines the elegance of mathematical proof with the emotionally profound wit of Dostoyevsky. Or: He courts paradox so primrosely, describing his Dupin-like detective character as having “reckless perspicacity” and the light in his infinite Library of Babel as being “insufficient, and unceasing.” But see, such worship is pale.

And problematic as well. More than any other 20th-century figure, Borges is the one designated — and often dismissed as — the Platonic ideal of Writer. His outrageous intellect is cited as proof of either his genius or of his bloodless cerebralism.

But Borges did have some mortal qualities. He lived most of his life with his mother. He loved detective and adventure novels. (His first story in English was published in Ellery Queen Mystery Magazine.) Though he started to go blind in his 30s, he never learned to read Braille. And in his later years he made some unappealing political remarks about being happy that, following the military overthrow of the Perón government, “gentlemen” were again running the country. (Perón, to be fair, had “promoted” Borges from head of the National Library to head of poultry inspection.) Such remarks are perhaps why he never won the Nobel.

But perhaps Borges’s most glorious and provocative “fault” was that he lived to be 86 and never wrote a novel. “It is a laborious madness, and an impoverishing one,” he wrote, in the introduction to a 1941 collection of his short stories, “the madness of composing vast books. . . . The better way to go about it is to pretend that those books already exist, and offer a summary, a commentary on them.”

He certainly did read vast books, however. For us Borges may be the ur-writer, but he thought of himself primarily as a reader; writing was just among the most intensely engaged ways of reading. In his essay “Literary Pleasure,” reprinted in ON WRITING (Penguin Classics, $15), one of three new Borges anthologies appearing this month under the general editorship of Suzanne Jill Levine, he says of his youthful reading — “the greatest literary joys I have experienced” — that he “believed everything, even errata and poor illustrations.” Reading was faith; writing a call-and-response form of prayer. To love a text: isn’t that just to find oneself helplessly casting about for something to say in return?

Which brings us back to worship. If serial rereading is one way to define worship, then one of Borges’s most revered gods was Robert Louis Stevenson. This even though in Borges’s time, Stevenson’s work was basically considered kid stuff. The first seven editions of the Norton Anthology of English Literature do not deign to include Stevenson, though he finally surfaces in the eighth edition, published in 2006. Borges not only commented on books that didn’t exist. He read books — pulpy and arcane alike — that few others bothered to see.

The Stevenson book Borges revisited most often was “The Wrecker,” a relatively obscure novel that Stevenson wrote with his stepson. Published in 1892, “The Wrecker” is a story of high seas adventure, high stakes speculation and high interest loans; it’s part mystery novel, part adventure novel, part mock Künstlerroman. The title refers to the practice of auctioning off the remains of wrecked ships along with any recoverable cargo, which is, yes, an irresistibly resonant metaphor for neglected books.

On the surface, “The Wrecker” could hardly resemble a Borges story less. At 500 pages, and full of incident, “The Wrecker” has the feel of a 27-course Victorian feast, served on a table crowded with doilies and finger bowls and odd utensils whose functions we can’t even imagine; Borges’s stories are more like truffle oil. Stevenson can barely go a page without mentioning bankruptcy, smuggling or sea captains; Borges, though he writes of bar fights and criminals, more often mentions Zeno’s paradox and the “Annals” of Tacitus. In the false dichotomy of the sword versus the pen, Stevenson is red and Borges black.

The main character in “The Wrecker,” Loudon Dodd, is a wealthy, untalented, unglamorous and highly likable young American man who cares nothing for his unearned money and longs for the life of an artist. Dodd goes to Paris to become a sculptor, fails at that, abruptly loses all his money, becomes involved in a series of wild business adventures through his charismatic friend Pinkerton, and eventually finds himself entangled in a maritime adventure involving opium trading, bunk stocks, debt and deception. All this adventure, it is almost explicitly said, eventually makes of him a kind of artist, or at least his life a kind of work of art, if a very pulpy one.

So why did Borges read and reread “The Wrecker”? What was it that he believed every detail of? And how was his own writing a way of reading Stevenson’s sacredly profane text? Borges’s readerly attention re-invents Stevenson, just as his writerly attention created those vast unwritten books that Borges chose not to write, but just to imagine and comment on.

Dodd and the other characters often marvel at how their lives have become as full of surprise and drama as a dime novel, and this is, basically, a happy thing. It’s as if to say that here, finally, are circumstances that do justice to the scope and scale of my emotions. It’s the idea of the objective correlative, done extra boyishly. In “The Wrecker,” the hyperbolized material world measures up to the outsize passions of the heart.

Think of it this way: there is a vast unwritten book that the heart reacts to, that it races and skips in response to, that it believes in. But it’s the heart’s belief in that vast unwritten book that brought the book into existence; what appears to be exclusively a response (the heart responding to the book) is, in fact, also a conjuring (the heart inventing the book to which it so desperately wishes to respond).

In his work, Borges achieves a related effect, by different means. Stories like “Pierre Menard, Author of the Quixote” and “The Book of Sand” refer to epic plots, but it’s the ideas and erudition, more than the action, that are colossal. Time, eternity, infinity and dreams — these are the only subjects commensurate to the passions of this quiet man who lived in Buenos Aires and in Geneva, though mostly in the vast nutshell of his own mind.

In “The False Problem of Ugolino,” an essay on Dante not included in “On Writing,” Borges quotes from an essay by Stevenson that makes the rather Borgesian claim that a book’s characters are only a string of words. “Blasphemous as this sounds to us,” Borges comments, “Achilles and Peer Gynt, Robinson Crusoe and Don Quixote, may be reduced to it.” Borges then adds: “The powerful men who ruled the earth, as well: Alexander is one string of words, Attila another.” The great deeds of the past may become no more than words, and no more than words are necessary to summon a power as grand and enduring even as Quixote or Achilles.

Among the vast books that do not really exist, and that Borges has commented on, are the innumerable pages of the future. Borges’s work answers the unanswerable weight of his reading, the boyish and the arcane at once. The pages of both what he wrote and what he only traced the shadows of present us with their own wavering interrogations; we are happy and afraid to be lost amid our insufficient and unceasing responses. Borges created his precursors, even Stevenson. We still do not know how to create Borges.

Rivka Galchen is the author of the novel “Atmospheric Disturbances.”